To solve button is a feature that we recommend using if you want to make sure that no customer is forgotten and everyone receives their reply as soon as possible. This function routes the tickets based on how long the ticket has been unanswered and based on the created SLA levels applied to the tickets. This way, the tickets from the customers that have been waiting for the answer from your support team the longest or the customers with an urgent issue, if defined by the SLA level, will be prioritized and routed to an agent first. 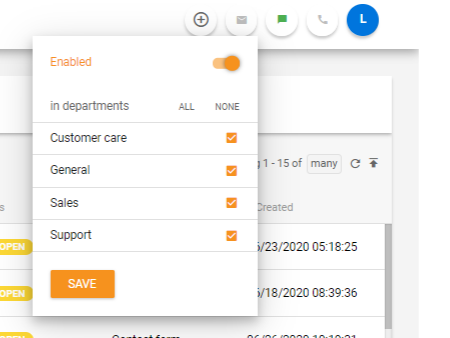 Once it is enabled, you will be able to see at the right top of the screen the number of how many tickets there are open and are waiting to be answered. In the picture below, we can see that there is 1 ticket that needs to be solved. 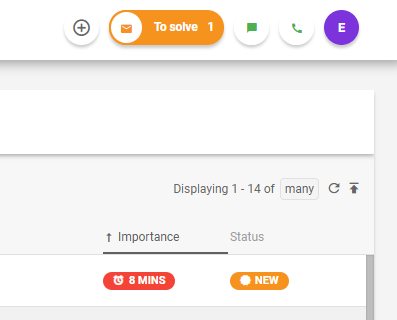 If you click on it, the ticket with the highest priority will open up and your agent can start working on it. If he closes the ticket and clicks on the To solve button again, the same ticket will open up, therefore they won’t be able to skip the tickets they do not like. In case they do not know how to solve them, they can just easily transfer the ticket to a 2nd level department where only a few people have access to for example. Or they can just assign the ticket to a specific agent and only then they would be able to open a new ticket.

Enabling this option might be useful if your agents assign tickets to themselves and they would like to have the ticket routed to them so that it will serve as a reminder and they would not have to answer from the inbox directly or worry that they would answer later then they should.

How the tickets are distributed

You can configure the way how the tickets are distributed in Configuration->System->General->To solve algorithm.

If you choose the Time priority, the tickets will be distributed randomly to any agent, based on when the ticket was received. The oldest unanswered ticket will open up first. If you have some SLA rules set up, these will be taken into account as well.

It is good to choose the other option, Prioritize last agent if you prefer the tickets to be answered by the same agent when a new message comes in. This setting won't change the order when the ticket should open up, just to whom it should open up.

If, for example, there are 2 tickets and one of them is a new one, so no agent sent any answer yet and then you have another ticket that is open, where agent A already replied before, then the later ticket will be directed to the Agent A that already answered the ticket before.

How to setup that agents can answer tickets opened from the “To solve” button only.

To do this, navigate to Configuration->Agents->edit specific agent->Departments->check Can answer tickets opened from the 'To solve' button only.

There is no default setting that would force this To solve to all agents. 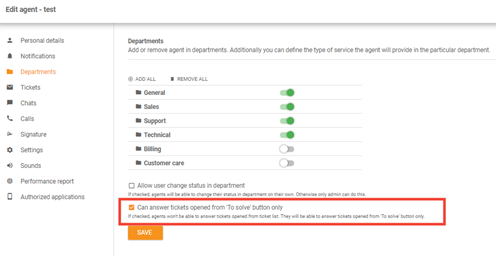 Please note that this option might be also automatically disabled in case there are more than 30 000 opened or new tickets in the department.