The Settings section found under Configuration > Call > Settings lets you define how the calls will behave in the application. Only admins have access to this section. 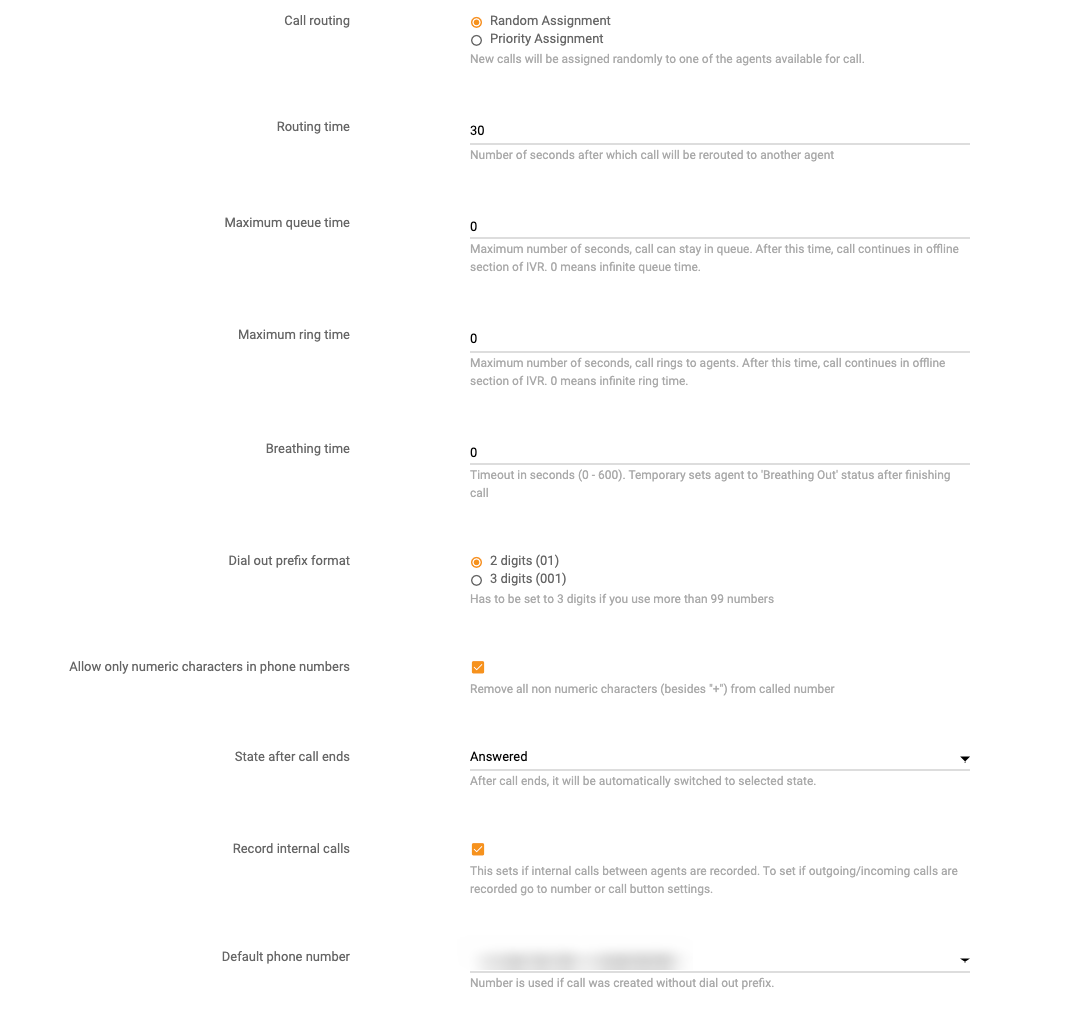 Call routing lets you choose how the calls will be assigned to agents when there are multiple agents available to receive calls.

Routing time defines after how many seconds of ringing the call should start ringing to a different agent. The default setting is 30 seconds so if agent A doesn't pick up the call in 30 seconds and there is agent B available the call gets routed to agent B while agent A will have 1 missed call counted in his report. Routing time has to be between 15 and 120.

Maximum queue time defines the maximum number of seconds a call can stay in the queue. After this time, the call continues in the offline section of the IVR. 0 means infinite queue time. Example: If you have the maximum queue time set for 60 seconds then after these 60 seconds of waiting in the queue the call will go in the offline section of the IVR. Note: Available for SIP numbers only.

Maximum ring time defines the maximum number of seconds a call rings to agents. After this time, the call continues in the offline section of the IVR. 0 means infinite ring time. Example: If you have the maximum ring time set for 60 seconds then after these 60 seconds of ringing to agents the call will go to the offline section of the IVR. Note: Available for SIP numbers only.

Dial-out prefix format is used for all SIP phone numbers to identify the number which should be used for an outgoing call when dialing from hardware device. You can choose between 2 digits and 3 digits. If you plan to have more than 100 numbers created in LiveAgent you'll need 3 digits setup.

State after call ends has two options and selects the state in which the call ticket is after the call is ended. The options are Answered and Resolved. This is mostly a cosmetic option, but if you are using "First resolve" SLA you might want to have Answered selected here since the ticket might not be actually resolved after the call has ended and the agent might need to transfer the ticket to technicians for example. If the agent assigns the ticket with the call to himself during the call, the call ends in Open status.

Record internal calls sets if internal calls between agents are recorded. To set if outbound/incoming calls should be recorded you need to go to Configuration > Calls > Numbers > Edit Phone Number > Check the box "" for phone number. If you would like to set to record calls made from call buttons you need to go Configuration > Calls > Buttons > Edit Call Button > Check the box "" for that specific call button.

Default phone number defines the number that is used if the call was dialed without a dial-out prefix. See more in the Numbers section article.